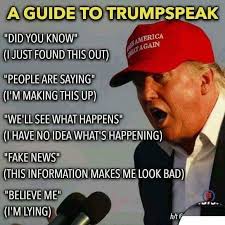 Over the last two years any number of critics have pounced on the simple stupid of Trump speak. The Atlantic's 2018 piece,  "How to Speak Like Trump: A short guide to speaking the president's dialect" is a fine example. Writer Kurt Andersen says, tongue in cheek, "I spent weeks studying transcripts of his interviews and press conferences and depositions, as well as thousands of his tweets, to assemble a lexicon I could consult as we wrote. This is an abridged version of that Trump style guide." The lexicon features recognizable Trump words like -

Yep that all too familiar decimation of the language that we take as an indicator of the Great Western Decline and the encoding of a great existential crisis.  I get how easy it is to equate this type of talk with small minds who oversell inauguration crowds and the return of coal mining jobs.
And yes, a linguist, I get the connection between thought + language.  I've spent many painstaking research hours analyzing transcripts of speech to shed light on a speaker's world view, perceptions and, dare I admit, intellect. I even gave a talk at my college on the language level of Trump's spoken language -  "A linguistic analysis of Trump Speak" showing that most of Trump's utterances were scored at about 5th grade level and lower!


But if the liberal and (supposedly) democratizing media is going to help elect someone other than Trump Tuesday November 3 2020 they better learn something from both Trump speak and the popular language of the conservative media ( let's say, FOXNews). 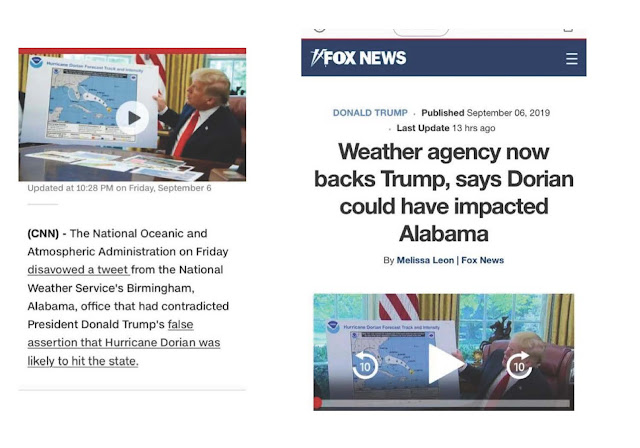 Even when I unpack that ridiculously long CNN sentence I still can’t make it understandable:
1. On Friday NOAA disavowed (said something was not true)something.
2. That something was a tweet.
3. That tweet was from the National Weather Service office in Birmingham Alabama.
4. The tweet from NOAA contradicted said something opposite) to what President Trump said.
5. President Trump said that hurricane Dorian was likely to hit Alabama.
Rule: if you are embedding 5 sentences into one long sentence you really have no interest in people understanding what the heck you’re saying.